I must be living right! 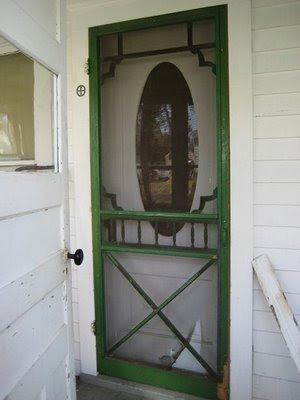 The mother lode for my house!

My cousins (who always treat me better than I deserve) generously donated this old screen door to the cause-it needs some help, but fits the front door like a glove! It was on their house in town (which my great Grandfather built) but it was not original to the house, and so they were kind enough to give it to me.

It has all sorts of fancy saw work and spindles, and looks like the screen doors on all of the old movies, and there's no way in hell I could afford a new one this nice. 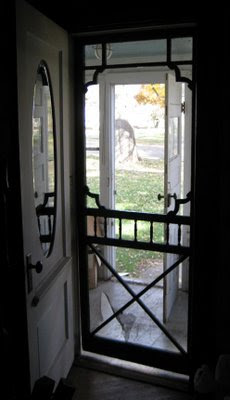 The screen has been dogged, likewise the front corner, but that's all easy to fix. That and a little paint will make it an entry to be proud of!

True story: A friend that I cannot name here was at someone else's house and his dog tore the screen door all to hell. When the lady of the house confronted him with the details, he didn't offer a nickel to fix it-but did volunteer this comforting thought: "Yeah....you got off pretty lucky...he done tore the one to home apart lots worse than this!" The wooden bracing has a really nice fluted profile, 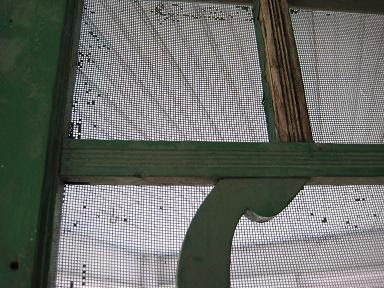 and it looks like it grew up with the house. I even had six old white-painted screws on the porch that matched the hinges, and an old hook screwed into the jamb matched the eye on the door for height and location. 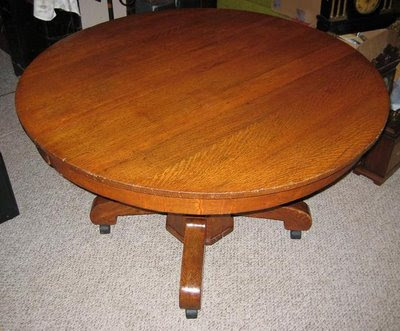 I also got another piece of good luck, in the form of this table, which is solid quarter-sawed oak, and forty-eight inches across the top. It has a rather ingenious, but simple little latch that holds the halves together, and they slide very easily apart to put the leaves in. One of the things I remember from my Grandmother's old house as a child was the big round oak table in their dining room. I have wanted one for a while, but they all seem to go for a fortune, so when this one was made available to me almost literally for the taking, I jumped on it. (Incidentally, they told me that it was forty-two inches across, which I measured and determined would fit into my car...turns out it is 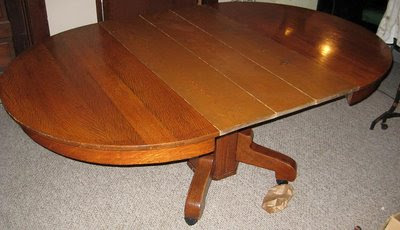 forty-eight inches, which meant some disassemble time required. Such fun. If I had a tail I would wag it, but I can truthfully say it got brought home in an Oldsmobile Cutlass. I am very happy with it though, and I'd do all of it over again to get it. The people from whom I got it thought it was from about 1920. It has modern casters on it, and at first I was going to remove them, but i like being able to move it with two fingers. 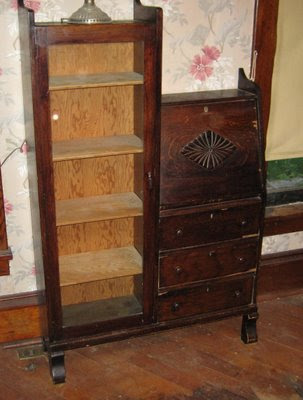 Last, but not least, a friend bought a house here in town, and I went to their sale, and got this desk. It is in sort of fixer-upper shape, but for what I paid for it I am not whinging any. It's one of those combination affairs, that have the desk and book case all in one. It is quarter-sawed oak veneer, and I think I may have some pieces to replace the missing. The mirror for the back is around somewhere, but the glass is broken, so I have that to do, and I plan on replacing the back with oak bead board or car siding.

I have been thinking about the heat situation, and remembered I have the one I bought for the farm, which I may use this year-it did all right...just look at how happy the hound was to have it! 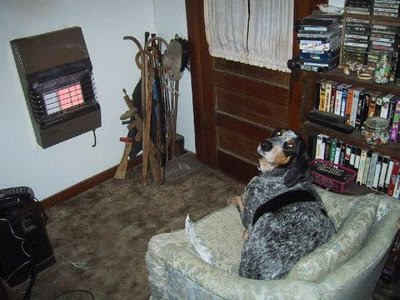 Welcome new house blogger! I love that screen door. To keep my cats from tearing their way out I cut a piece of hardware cloth to fit, spray painted it black, and attached it to the door first. Then put on the charcoal-colored metal screen. It has worked well. They have ripped the screen but not gotten out.

Thanks for the tip! I'll have to do that to mine-the hound will love me for it!

Nice! You can never find nice used screen doors, it seems. What luck!