Some Hillbilly's a'livin' in my DOGHOUSE!

Moved in the week of Thanksgiving!

There was a couple thousand dollars left over from Mammie's affairs, and my brothers and I divvied it up. With my share, I got a furnace from a place in Okoboji at a hell of a discount because some other body put a ding in the side, but since it has a new warranty and that it was a no-brainer. It is 95%, and all! Also, I got a new water heater, and replumbed all of the Natural gas lines inside. I had a tankless that I wanted to use, but it didn't have the special vent hardware with it and for what it cost to dink with I just call to the hardware store and he brought one down to me.

The night we did the hot water and plumbing I did the two-step Maytag bath in the clawfooted tubbie. Know what that is? You draw a nice hot bath, scrub and lay there till the water ain't warm, then you drain the tub and draw another hot one just to sit and stew in! Since I am a bachelor, I can do that. So I do.

There isn't any galvanized plumbing left in the place, and all the cast iron sewer stack is replaced with PVC because it was rotten. We rammed a rubber boot in the cast iron pipe going out, and put the PVC in that, and added a clean out while we were at it. Now if the line stops up we don't have to pull the terlet off to do something about it. Speaking of things terlet I got to get a new one, we broke the bowl. The hardware store has a "pot-in-a-box" kit pretty reasonable, that may be what I get. 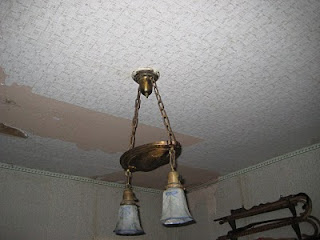 I rewired a light from my great-grandmother's house, and hung it in the back bedroom. It's a brass pan light, hangs on two chains and has two sockets. The wiring was truly scary. It was all half-assed, so it got redone. The shades are frosted, and have lilacs painted on them. One has a corner that was broke, dinged up, and glued back together, but it doesn't show so much, and even if it did what the hell, my great-grandmother won't ever buy any more lights. Besides, it ain't the Gotrocks' mansion, and in the end the only one that has to be happy about it is the one I look at in the mirror. 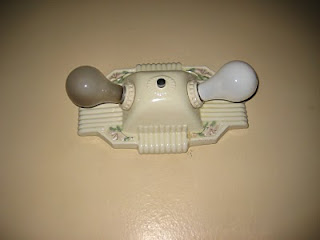 I also put a nice Porcelier fixture in the bathroom. I got it from Shirley Pico in Emmetsburg, when she had the antique store. She was a good friend of my Grandma's, and she made me a real deal on it, because she knew I liked them. It is supposed to be a ceiling fixture, but it looks all right on the wall. It's real art-deco-looking, and has matching colours to the rest of the room. The wiring was pretty nice yet. Those bulbs looked like hell, but they've been in the old light for who knows hows how long.


The porch of doom is no more-it started making ominous noises, so an executive decision to perform the removal. Saving all the wood I could, it took an hour to pull it off. I burnt the rotten wood up in the dark of the night, and stacked what was worth bothering with. Mammie's front storm door and the one from Teri's house are up and working.

A whale of a storm is commencing, and pictures are to follow.

I did the two-step Maytag bath Monday night after I fell off the ladder. Now I know its "proper" name!