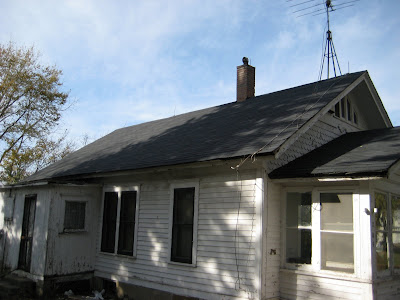 Well, what little summer we ever had here was nice, I guess, but now we had our month of warm weather and it's time for winter again! It's too damn cold to do anything in here without the furnace hooked up, so that's next on the agenda. Here is the roof done on the south side, before the vargeboard got replaced. That porch is going the way of the Studebaker next summer, because the basement stairs are in there and the whole thing was a temporary measure ninety years ago. It's truly had the pickle. 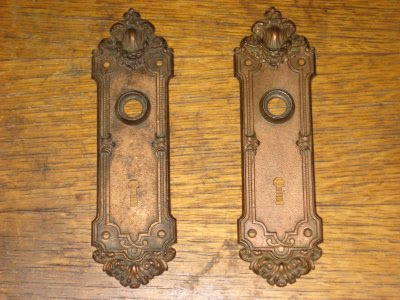 Here is a set of plates that my eldest brother scavenged from some building in Iowa City where renovations were taking place. He used to go to school at University of Iowa, and worked there for a while, so he scavenged some goods from time to time. I think I have six, which will replace all of the plates on the outside doors. At one time I had a knob or two, but they were pretty scabby, and all of the knobs in the house are china, so they'll probably get black knobs this time around. 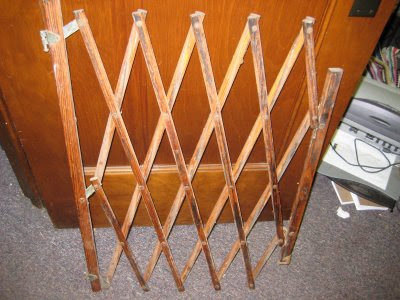 Also, I have a pair of these old baby gates. I saw some eyelets screwed into one of the door jambs, and sort of guessed there was a gate there, but then one turned up in the attic, and I found an identical one at a local shop for next to nothing. What on Earth does a bachelor want with baby gates? Because they also keep long-snouted hounds in and out of certain parts of the house. Long-snouted blue hounds. Like this one. 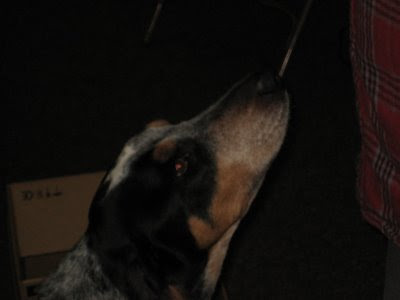 It's not his fault that his nose is bigger than his brain! He is pretty well trained to respect a baby gate because we had them around when he was a puppy. I do confess that when it's cold and the furnace isn't putting forth, he is a boon to have laying on the bed. He is an eighty pound furnace.
Posted by Neighmond at 8:50 AM No comments: