I'm ready for my close up.

Here are some pictures of the old Tappan cook stove that came with the house. If you want to learn about Tappan stoves, go and visit http://tappantalk.blogspot.com/ . The folks that run it also have http://stuccohouse.blogspot.com/ , which details the work done on a bungalow in the cities. 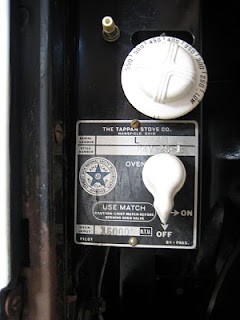 This is the manifold where the oven valve and pyrometer knob are located. Since it hasn't any standing pilot, it has to be lighted by hand each time the oven is used. You set the temperature, strike a match, and touch it to the touch hole in the front of the oven. Then you push the valve in a little and turn it as far counter clockwise as it'll go. In short order, it'll light, and sucks the fire right off the end of the match!
Once it reaches its temperature, it is very accurate, because it can't relight itself so it has to mantain constant temperature. 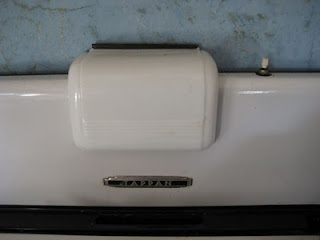 This is the top of the cook surface, with the work light and oven vent. The handle to the right on top of the backsplash turns on the light. I am not too sure that switch is original. Most of the wiring in this stove was replaced sometime in the fifties. The cord is the next thing to get it. This one has the "hood ornament" under the light. 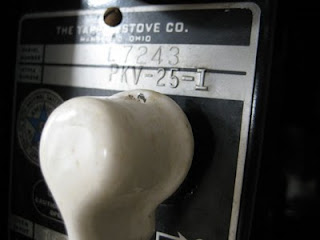 Here is the close up of the model and serial numbers. Smarter people than I have sort of figured out that this stove was made in a cooperative venture with a company called Philgas, who made Skelgas appliances at one time.

There is also a Ruud water heater that has been down there since time began, that was a Skelgas deal before the PPO had it converted. 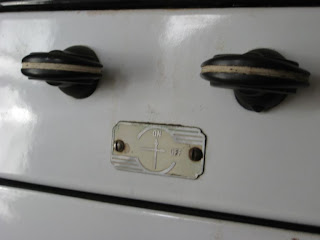 Here is the plate that shows the knob positions, along with the closeups of the (dirty) knobs.
Posted by Neighmond at 12:03 AM No comments: