No More Dog in the Dog House 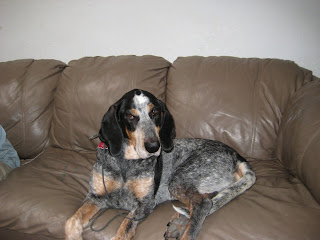 He started slowing down this last fall, and by last Wednesday it was plain he was in more misery than he deserved. We took him to the vet, and it turned out he got arthritis in his back, and two of the bones near his tail broke. That meant he couldn't use his back legs without lots pain. The vet said this condition would rapidly become worse, and even in humans meant a wheelchair and lots of narcotic painkiller.

Two shot syringes and five minutes later it was all done, and we buried him out by his doghouse with his long snout pointed to the road like he always lay.

He's out of his suffering, but it's too quiet around here now. No clicking toenails or sniffing snout makes for one still damn house. No living furnace on the bed means I am up earlier because it's too damn cold to linger.

Work at the house goes on....If the basement door ever thaws out we got the kitchen floors to level.
Posted by Neighmond at 1:37 PM 2 comments: