It all balances out.

The folks over at The Octagon House had a post recently about an old scale they found in their attic, which very well could have belonged to the granddaddy of all the P. O.'s. Being the nosy creature that I am, I spent a couple hours sort of giving it (and the player piano) the go-over. It's sure a neat feeling, to have a tangible link to the past like that! I've always had a weakness for old mechanical odds and ends, and thought I'd take a moment to share this. 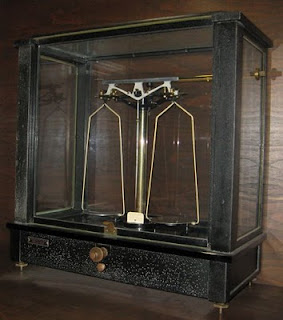 The proper term for such an animal is actually a balance, because it has no provision for directly measuring, without the use of a set of weights. I used to use it to weigh gold and diamonds and so forth when I had the shop, and hated to sell it off when I closed up shop, although a few people wanted it.

It was made by the William Ainsworth Company, who began making balance during the gold rush days and continued until well into the 20th century. William Ainsworth was a watchmaker, who was often called upon to repair the delicate assay balances of the day, and eventually began manufacturing his own. They were an interesting parallel to watches of that era, in that they were also mass-produced and yet still maintained a degree of quality unrivaled since then. The metal cabinet and and lack of fancy finishing technique is indicative of the period between the world wars. Nothing is added to the balance that does not serve a purpose, and the thing still looks elegant. There are a lot of "little touches" like the counter weights that hold the front door up, like an old double hung window; and the feet that all screw in and out to level the base.

Because it is mass produced and not in the wooden cabinet and so forth, it is nowhere near as valuable as some of the other balances on the market today, and also sold for less new. Still, at $186 in 1942, the thing would cost almost $2,500 to buy today! 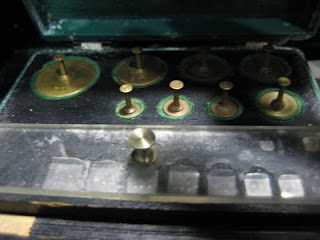 The weights are all packed in their own little places in a hard case. There are two sets with this one-the old set and the newer. Both sets are gold plated brass whole weights, and inert metal fractional weights (the silver looking ones.) Both are quality sets, and are pretty accurate for most work.


The old set is metric, and still has the traceable 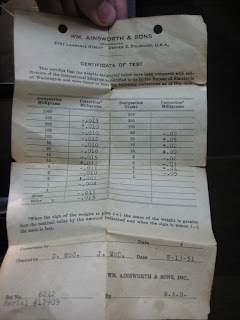 certification yet. This meant that they had been compared with a known set of weights directly traceable to the the master standard, and the difference noted so that it could be taken into account when the weights were used. This set was initially the second to the top of the line set that Ainsworth sold. 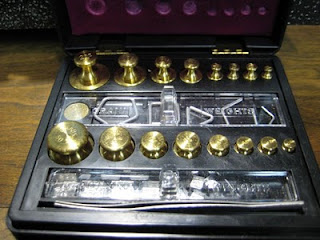 The newer set has metric, but also has a pharmaceutical set, with grains, pennyweights, and scruples. Let it never be said I have no scruples! The little forceps are there because you aren't supposed to touch the weights with your bare hands because the oil from them will cause tarnish or corrosion, which alters the weight.

This balance is one of two I own, and sets on top of the safe at the boss' store. The other is the next model cheaper than this one, and stays at home.


Anyway, there's anther oddball item, which I seem to have no trouble coming up with (I wonder why?)

Cheers!
Posted by Neighmond at 10:40 PM No comments: