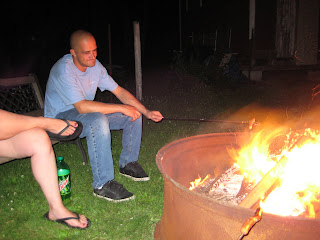 Last fall I borrowed a friend's fire ring, and he needed it back this week, so I had to scare another one up. The fellow the first block over from me built a beautiful patio and had a nice steel rim by the garage that he wasn't using anymore, so I got it for a fire ring. He even delivered it to my place and set it out in the yard!
The first night I was home after it came we had to try it out, so come dark we broke out the scraps and wood, and broke it in right. 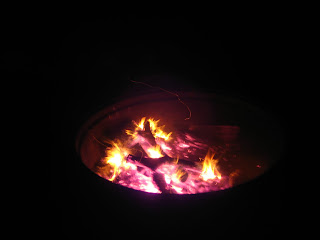 Already, the neighbours and I have had three fires in it, and it will prove to be a favourite gathering spot, I think. As much wood as I have been getting rid of here lately, I am sure to have a supply well into the next decade.
Nothing is like a campfire roasted weenie or burnt marshmallow, and it is nice to have your entertainment close to home where nobody has to drive and if someone wants a little something to drink or smoke a pipe or cigarette they can do as they wish, because it's out behind the house, and nobody cares as long as we aren't making braying asses of ourselves and pestering the neighbourhood. 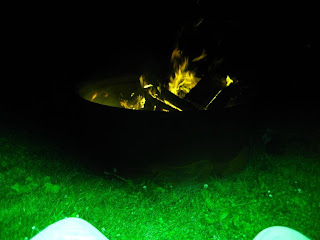 People sometimes forget how relaxing and fun it can be to set out of an evening with the fire going and talk, roast weenies and marshmallows, or just be.
God knows that entertainment of any sort can be dear these days, and I guess with the $20 the ring cost, and gallon of gas to cut the wood with the chain saw, and the buck and a half apiece for weenies and marshmallows, it's a damn sight cheaper than going out to a beer joint or picture.
I think that each time I used it cost me about three dollars, and that's if I cook food on it. 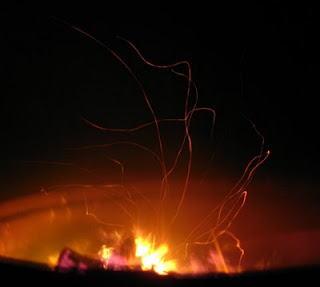 Even if nothing is said there is a certain fellowship to sitting about the fire and watching the distillate of a hundred 36,500 sunrises, sunsets, and everything in between.
The flames can be calming to look into. I find that I can look into them, and before I know it a good amount of time has passed. One of my college teachers used to suggest a candle flame to meditate on, so I suppose this is the same thing, on a bigger scale.
For whatever it was worth, I used to know a lady that would use a big glass or brandy snifter of clear water and a fire to summon ghosts (so she claimed.) But we won't do any of that-let the dead lie still and we all get along better!
Posted by Neighmond at 12:40 AM 2 comments: