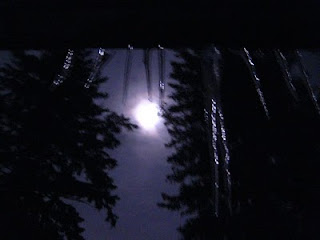 The furnace had a hiccup this week and the pipes froze. *)(&^()*&! Not too big a deal though, the neighbor caught it and called me, and we fixed it pretty cheap.

More nasty on the way-look at the ring around the moon. It's been pretty bitter here of late. 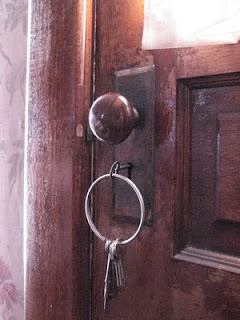 Have a picture of the door. I'm not too sure what occasioned it, but have one anyway. It's the one from the dining room outside, that gets used the most.

Here's a tip: Turn the key a half-turn before you go to bed at night-it keeps someone from using a key outside, and makes sure it's in there handy in case of a fire. 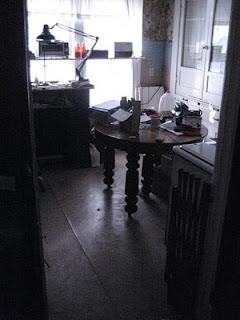 While we're at it, here's the kitchen. It's a mess because I am fixing clocks there until the red shed is ready. It's a small but bright room. It'll be nice to eat breakfast by those big windows.With the table pushed up to the windows (where it belongs) there's plenty of room in there. Also, the table is good work space, being as there is zero counter area.

The ceiling is shot to hell. I think I am going to do what http://stuccohouse.blogspot.com/ did with hers-it looks pretty nice, and I already have the furring strips for a tile ceiling, it's just that the tiles themselves are what my insurance agent calls "Totally depreciated. 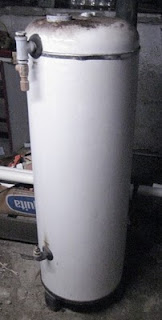 Thought I'd snap a few of the old water heater-it's a Ruud and been down there since the year dot. I think it's a little newer than the cookstove, but not by a whole hell of a lot-it's one of the first automatics. 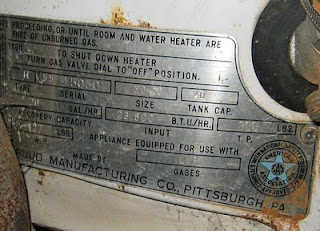 The boiler capacity is 20 Gallons, and it was originally set up to burn skelgas. 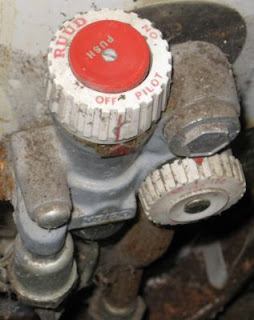 This thing actually fired up when I tried it, but I didn't have any idea of running the thing for keeps! Almost 500 later I have a new water heater that works like a champ, so I can't complain. 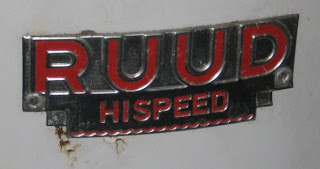