Do I really need another project? 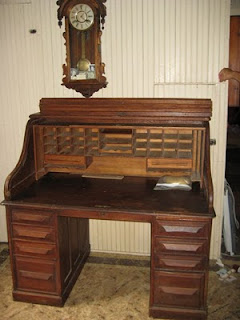 I have wanted one of these since I was a kid. They usually either sell for some ungodly sum, or are too far away to bother with. Then, along comes Mr. Gladis, who has gotten a new hip, and didn't really need another project either. He had two of these bad boys, so we came to terms, and he sold me one and kept the other.

It's a Cutler, from 1897. The drawers all lock when the tambour is closed. It has most of the pigeon holes intact, and enough of the dividers for the ledger slots and centre racks that I can copy what isn't there. Its looks are deceiving-it is 54 inches wide and pretty deep. 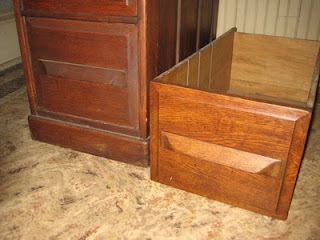 The bad news is that it needs to be taken all to pieces and re-glued, and several corners are actually broken. The good news is that there isn't any veneer-it's all solid, and the broken corners are going to be a little easier to fix because of that. Plus the finish is mostly intact, and can be cleaned instead of refinished.
Posted by Neighmond at 8:26 AM 2 comments: